What do We Know and What Should We Know about Rebel Non-Violence?

Join us for this roundtable discussion sponsored by the Orfalea Center’s Global Security Hub.

Tanisha Fazal is an Associate Professor of Political Science and Peace Studies at Notre Dame University. She is also a core faculty member at the Kroc Institute for International Peace Studies and co-director of the Notre Dame International Security Center. Fazal’s research focuses on sovereignty, international law, and armed conflict. Her work in rebel diplomacy includes “Rebellion, War Aims, and the Laws of War.” Fazal also wrote State Death: The Politics and Geography of Conquest, Occupation, and Annexation (Princeton 2007).

Kathleen Gallagher Cunningham is an Associate Professor in the Department of Government and Politics at the University of Maryland. Cunningham’s research focuses on the politics of self-determination, civil war, rebellion and non-violent resistance. Cunningham is the author of Inside the Politics of Self-Determination (Oxford 2015), in which she examines the political relationship between self-determination groups and states. Gallagher-Cunningham’s work on rebel diplomacy includes analyses of rebel elections in war.

Reyko Huang is an Assistant Professor in the International Affairs Department of Texas A&M’s Bush School of Government and Public Service. Huang’s research focuses on civil wars, democratization, and rebel diplomacy. She is interested in why some rebels choose to advance their military and political objectives through diplomatic activity. She explores these issues in “Rebel Diplomacy in Civil War,” in International Security (Spring 2016). Huang also authored The Wartime Origins of Democratization: Civil War, Rebel Governance, and Political Regimes (Cambridge 2016).

Morgan Kaplan is a Fellow at Stanford University’s Center for International Security and Cooperation, and holds a PhD in Political Science from the University of Chicago. Kaplan’s research focuses on the strategic use of international diplomacy by insurgent groups, specifically the Iraqi Kurdish and Palestinian national movements. He is the author of “Strategies of Insurgent Diplomacy: Evidence from the Iraqi Kurdish Liberation Movement,” in which he examines the use of insurgent diplomacy to solicit third party aid.

Margarita Konaev is a Postdoctoral Research Fellow at the University of Pennsylvania’s Perry World House. She holds a Ph.D. in Political Science from the University of Notre Dame. Her research examines how global and sub-national demographic factors and shifts shape efforts to prevent, manage, and resolve armed conflicts. Together with Tanisha Fazal, her work on rebel diplomacy includes “Rebels and Landmines: When and Why do Rebel Groups Commit to Adhere to International Humanitarian Law?”

Zachariah Mampilly is Director of African Studies and an Associate Professor of Political Science and International Studies at Vassar College. Mampilly was previously a Fulbright Visiting Professor at the University of Dar es Salaam in Tanzania. He is interested in the roles international organizations, particularly aid agencies, play within conflict zones, and in peacebuilding and reconstruction. He is the author of Rebel Rulers: Insurgent Governance and Civilian Life During War (Cornell 2011), and of Africa Uprising! Popular Politics and Unarmed Resistance (Zed Press 2015).

William Reno is a Professor of Political Science and the Director of African Studies at Northwestern University. Reno’s research focuses on the causes of political violence, specifically in Africa.  He is interested in authoritarian regimes and the activities of insurgent groups, recently focusing on rebels’ framing of their aims to external audiences. Reno is the author of Warfare in Independent Africa (Cambridge 2011), as well as In Harm’s Way: African Counterinsurgency and Patronage in Politics with Chris Day.

Megan Stewart is an Assistant Professor of Transnational and International Security at American University’s School of International Service. She is a Pre-Doctoral Research Fellow at Brookings Institute for 2015-2016. Stewart’s research focuses on civil war processes, specifically examining rebel governing strategies and non-violent activities. She is interested in how these strategies shape domestic and international attitudes towards the rebel groups. Stewart’s work includes “Civil War as State Building: Determinants of Rebel Public Goods Provision,” and with Yu-Ming Liou “Do Good Borders Make Good Rebels? Foreign Territorial Control and Civilian Casualties.” 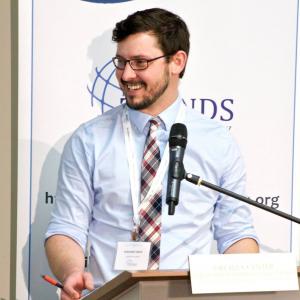